Ask Timothy Hughes about his traumatic brain injury and what led him to Community Partnerships, and he likes to begin the story the same way every time.

“Let me tell you about when I got killed.”

It was the late 1980s, and Timothy was living in California. He was driving to a meeting on his motorcycle when he hit a deer that jumped in front of him. He was pronounced dead on arrival at the hospital.

Miraculously, Timothy survived, and after 12 days in a coma and months of recovery, was even able to go back to work.

For the next several years, however, the impact of the injury wreaked havoc in his life. Setbacks included seizures, two bouts with meningitis, and a major brain surgery. Additionally, Timothy’s injuries changed the way he behaved and the way he interacted with people. He struggled with appropriate behavior, memory, and self-confidence.

”It was chaos,” he says. “I wasn’t sure what to do or where to go. I didn’t have any real direction in my life. I wanted to be independent. I wanted to be treated like an adult.”

Timothy joined the Brain Injury Support Services program after his parents suggested that it could help. Timothy wasn’t so sure. “At first I was a little embarrassed about being in a place where people knew I was a ‘head case,’” he says. But eventually he came to understand how the program could help him.

“I understood that this would be a place where I could learn things…a lot of things about communication and proper behavior. It was helpful to meet people and to know that there were people who understood my perspective on things.”

The Brain Injury Support Services staff worked with Timothy to improve his memory, concentration, social skills, and other areas that had been impacted by his brain injury. They also started him down the road to reentering the workforce. They helped him identify his career interests, develop a resume, and complete mock job interviews.

Today, Timothy has graduated from the Brain Injury Support Services program and is currently enrolled in the Supported Employment program, where he is searching for a job.

“I felt a big improvement during the process in the program. I have a much better sense of security and independence,” he says. Find out how you can begin your employment journey today! 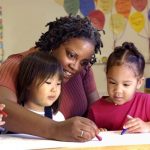 Learn more about how Partners In Inclusion can help you empower ALL children to succeed. Trainings are available now!